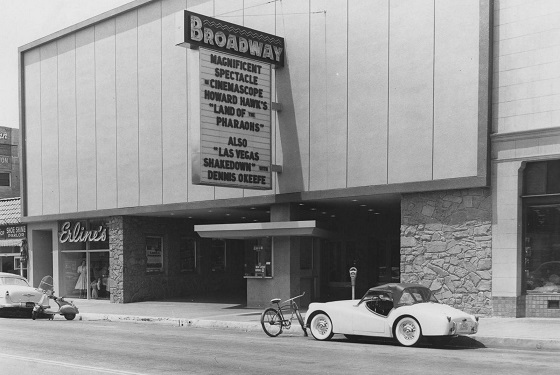 I wasn’t alive when the movie theater pictured above was showing Howard Hawks’ Land of the Pharoahs in 1955 but it still looks familiar. That’s because the architectural look of cinemas in the fifties carried through well into the seventies and eighties.  Maybe I wasn’t around in 1955 but I was around still visiting those old fifties cinemas well into the nineties before they were forced to make way for the megaplexes that replaced them.

I don’t complain that the megaplexes took over, mind you.  Megaplexes meant a lot more people in the suburbs could see movies that, for decades before, meandered their way around the country in limited engagements, occasionally “held over” if the public demand was strong enough.

So, no, I don’t complain.  It’s just that those older theaters still look more familiar to me than the newer ones because I saw so many movies in those older theaters that it will always be the standard in my head for how a movie theater looks.  I could see a thousand more movies in the megaplexes over the next twenty years but they will never replace the theaters of my youth, in the city, on the main strip, with a single screen, maybe two, where you didn’t even know what the new movies coming down the pike were until a “coming soon” poster went up in the lobby.  I miss that.  Now I know the release dates for movies that haven’t even been made yet and there’s no question of where and when I’ll see them.  It’s convenient.  Again, I’m not complaining, just noting.

I guess for me, like many I suspect, the experience of seeing the movie is as important as the movie itself.  We can all see any movie we want at home on our massive flat screens or over-sized laptops but going out to the movies, well, it’s just different.  I’ve loved many a movie at the theater that underwhelmed me at home and I don’t mind the fact that I know, deep inside, that a big part of my reaction to a movie I see at the theater is just that, its location.  Location counts for a lot.

Just as important to me as seeing movies is discussing movies.  I’m not fond of experiencing movies in a void.  I write for Turner Classic Movies and enjoy the back and forth I have with readers there and I have enjoyed the same on social media.  Now I start up this new site in the hopes of discussing even more, in a new location.  The old home still feels familiar but its time has passed.  There are places I remember but new ones beckon too.  I don’t know where any of this will lead, but I’m anxious to give it a try.  And see what “coming soon” poster shows up in the lobby next.