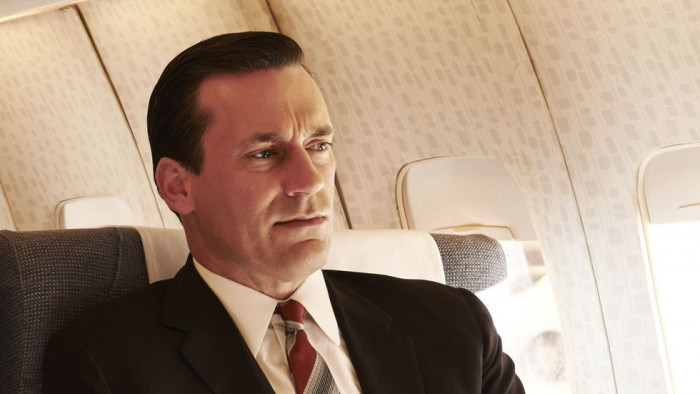 A film essayist I very much admire, Rod Heath, tweeted this recently after he had finished watching DEADWOOD. While satisfied and entertained, he felt the need to communicate a deeper frustration with the state of television:

It would take a long time to explain that reaction (might indeed be worth an essay), but some of it can be boiled down to: these shows mistake being busy for being complex, and mannerism for style.

“These shows mistake being busy for complex, and mannerism for style.”

None of this was meant to cast a shadow over the critical and viewer success of DEADWOOD, merely that the laudits surrounding it and many other shows often mistake complicated for complex. It’s been a personal gripe of mine for years.

To elaborate on this, I’ll take a show that I’ve watched over the years, one that received excellent reviews and that I personally enjoyed very much, MAD MEN. None of this is about me hating or even disliking this show. When I dislike a show, I usually bail somewhere in the first season. That was never the case here. I chose it specifically because while I found it enjoyable and full of potential, I was, as Rod says, disappointed by the busyness of its storytelling, a busyness that almost insured its potential was only spottily realized in between hailstorms of battering complications.

MAD MEN ran from 2007 to 2015 and concerned the story of Don Draper (Jon Hamm), who in reality was Dick Whitman, a nobody from a seedy background who took a dead lieutenant’s name in combat and conned his way to the top of the advertising world. The story, encompassing a beginning, middle, and end, could be presented as three acts. In Act One, we discover Don is a fraud and he desperately tries to hide this from everyone. In Act Two, he is discovered by a coworker or two, and his wife, and must reevaluate his identity, indeed, his very existence as his personal life crumbles. In Act Three he deals head on with his past and uses this reflection as a jumping off point to a new understanding of himself, as well as a new understanding of the younger generation and how he can con them into becoming soulless consumers.

The problem that MAD MEN encountered was the same problem encountered by virtually every tv show that ever makes it past the pilot: No one knows when it’s going to end. It could be a hit, a bomb, or a network placeholder that gains steam late and stays on another ten years. As such, MAD MEN, again, like most shows, has a one season first act and a one season third act, both surrounding a second act that runs as long as the show is profitable and the lead actors agree to keep resigning their contracts. In this case, that was five seasons. And stretching out a second act five times longer than the surrounding acts is almost always a spectacular way to become aimless, and needlessly complicated, until someone decides to just end the damn thing.

The result for many fans, including this one, was five seasons of watching Don Draper run in place while wondering where any of this was going to land or if, indeed, it ever was. To keep Don running in place until someone decides to remove the breathing tube, the show necessarily focuses on the side characters. Admittedly, if there is a strength and advantage to aimlessly drifting through a second act, this it it. The strength is that the side characters allow for multiple story lines that can expand the viewer’s understanding of the lead character’s environment but only to a certain degree. For instance, we don’t need separate movies for every supporting character in CITIZEN KANE to understand Charles Foster Kane, or separate movies for every character in THE GODFATHER saga to understand Michael Corleone. Yes, showing a bit of them helps but too much side story risks losing sight of the main character.

There was a mild pleasure in learning practically everything one could hope to know about every other character in the show but, in the end, it didn’t add up to much for Don. In fact, it’s arguable that, by his very nature of keeping people at bay, it literally added up to nothing. But it did keep things going for five seasons. It wasn’t complex, as it didn’t really intertwine with Don’s existential motivations, it was just complicated. And it was complicated with a purpose: Keep everything going until we can figure this out.

None of this impacted the show’s success or critical praise. And it was a very good show so receiving praise wasn’t exactly unexpected but the quality of the praise seemed to exceed the actual merits of the show, or at least, it seemed to willfully ignore all that running in place.

In the last few years, more Limited Series have been created than ever before. Series where they actually do know how long the show will run before they even start. HBO’s VICE PRINCIPALS was a two season show that was planned out as a two season show by Danny McBride from the start. As such, there was no running in place. Netflix’s RUSSIAN DOLL went the same route but even more efficiently. It had one season, and told the story from beginning to end in a mere eight episodes. Unsurprisingly, it was one of the highest praised shows of the last decade and a lot of that can be attributed to the fact that it knew where it was going from the get-go. Natasha Lyonne’s character, who finds herself constantly dying and waking back up at the same party to start over, didn’t use this as a first season, only to have her wander around trying to figure it out for the next seven years until the audience dwindled and they finally pull the plug.

Television is still adjusting to the newfound plethora of outlets at its disposal and all the new rules for watching, sharing, binging, and analyzing. But hopefully, that learning will lead to more single season, two season, or three season shows and a lot fewer treadmill shows that exhaust the viewer long before the characters even work up a sweat.