I started going to the movies in the seventies and Steve McQueen was one of the first stars I got to know in current releases. When I saw his last film in the theatre, The Hunter, on opening weekend no less, so excited was I to see it, I felt I knew him well. I didn’t. Even though I loved movies like The Blob, The Great Escape, Bullitt, Papillon and, yes, The Hunter, mediocre as it may be, I didn’t fully understand Steve McQueen as an actor. I liked him and his mov 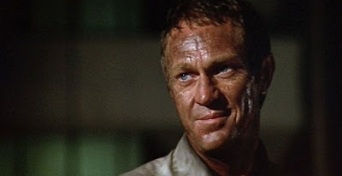 ies but never felt he was doing the job I thought others were doing when it came to big screen acting. I certainly didn’t think he was bad, I just never gave him much thought as an actor overall. But then, very recently in fact, I watched The Towering Inferno for the first time since childhood. It was a revelation.