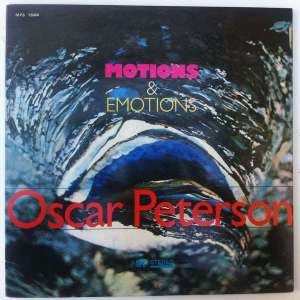 Oscar Peterson’s career as a jazz pianist was always a bit tricky. Unlike a Bill Evans or Herbie Hancock or Victor Feldman, who could control a set through steady use of block chords and minimal melodic adornment, Peterson was all about flourishes. His style was such that the left hand was of only nominal use while the right hand created intricate melodic magic. Which is all to say, Peterson worked best as a front man, not an accompanist. And when accompanying him, best to keep it simple. Too much counter melody, too intricate a bass line and the whole thing could quickly become an incoherent mess. Perhaps that’s why Peterson’s foray into orchestral jazz turned out so well.

In 1969, Peterson recorded Motions and Emotions, an orchestral jazz album, sometimes derisively referred to as Muzak Jazz due to the lush strings and sonorous piano lines. Certainly those strings, beautifully arranged by Claus Ogerman, sound reminiscent of the type of music those over forty might recall hearing in department stores and elevators in their youth (hence the term, “elevator music”). But just because the unimaginative covers of popular hits for the Muzak corporation used lush strings doesn’t mean they’re a bad thing, just that they can be used well or poorly. On Motions and Emotions, Peterson and Ogerman use them perfectly.

Motions and Emotions, with its beautifully swirling wave cover, was a clear attempt by Peterson to put out music more tuned in to the new standards, if not more tuned in to the new sound. Peterson was no fool and wasn’t about to start playing rock/jazz fusion just because most standard jazz was suddenly passé (to the incredibly short-sighted, that is). No, while other performers in jazz did just that, most notably Miles Davis on Bitches Brew, Peterson stuck to his strength and made nods only to song choice, not style. And those choices serve his style well, until the last cut on the album collapses under the weight of a musical genre gap that simply cannot be overcome.

The album kicks off, wisely, with a Henry Mancini tune, Sally’s Tomato, from Breakfast at Tiffany’s. If you’re going to kick off an orchestral jazz album with any composer, there’s probably not another one out there more suited to the task than Mancini. It also gives Peterson and Ogerman the chance to throw in a soft samba undertone, a foreshadowing of not only the album’s grandest moment but one which may stand as one of Peterson’s finest achievements. More on that in a moment.

After that we get into the more poppy of the new standards Peterson is covering, beginning with Sunny, that old pop hit warhorse covered more times than most other songs ever written combined. It may not be the gold standard of modern music but, by God, Peterson and Ogerman make it work beautifully with Ogerman giving the orchestra a dramatic punch that the original version, and every other pop cover of it, could only hope to replicate. Ironically, when the album collapses later, it will be with source songs infinitely better thanSunny. Go figure.

From here, Peterson breezes through Jimmy Webb’s By the Time I Get to Phoenix, Gayle Caldwell’s Wandering and Burt Bacharach’s This Guy’s in Love with You in a way that makes them all of a piece, kind of a trilogy stuck in the middle of the album. The tempos and rhythms of each move perfectly in and out of each other and signals in imagination not just in arrangements but of song order as well.

And then we get Wave. One of my favorite jazz composers, Antonio Carlos Jobim, pennedWave in 1967 and it became an immediate standard among jazz musicians. I have the original version by Jobim as well as four other versions. They are all splendid. Peterson’s is majestic. It is not only the high point of the album but one of the high points of Oscar Peterson’s recording career. Taking Jobim’s original three minute samba song and extending it out to six minutes gives Peterson and Ogerman the time to transform it into an epic piece of modern music, slowly bringing in the low strings, then strumming guitar and horns before Peterson adds a few simple melodic lines, then trades off each verse with the orchestra until the final two minutes when both orchestra and piano build towards a crescendo that never arrives but fades away as Peterson and Ogerman see how many contrasting notes can be played without falling into the realm of cacophony. It is, quite simply, marvelous, and worth the whole damn album on its own.

After that, Mancini’s Dreamsville is the perfect song to take the album out, gently serenading us into a hypnotic state of orchestral jazz bliss. And that’s where it could have ended. However, there are three more songs and the first two are strong if redundant while the last is a serious misfire threatening to bring the whole enterprise down. Of course, it doesn’t because no one song could bring down the greatness that precedes it but still, it’s regrettable to say the least.

Two of the final songs are Yesterday and Eleanor Rigby by Paul McCartney and released, of course, by The Beatles (with the usual contractual “Lennon/McCartney” songwriting credit regardless of whether both had a hand in any given song or not). Those may be songs of superb craftsmanship but they don’t work as well for jazz. The clash between the opening jazz tempo arranged by Ogerman for the orchestra and the suddenly altered tempo once Peterson starts playing the Yesterday melody is noticeable but Peterson still manages to make the song work splendidly. The two separate sections, the one playing the familiar melody and the one where Peterson riffs, are both well done, and the only real problem the songs suffers is that the melody is simply too familiar. One wishes Peterson had chosen a less iconic song.

Eleanor Rigby’s baroque melody clashes with the feel of piano jazz in such as way that Peterson has to reinvent the melody halfway through and does so very well. Ogerman and Peterson do the best job they can and Peterson’s flourishes pull out the melody in ways Lennon and McCartney (and producer George Martin) only hinted at. The only regrettable aspect of this is that putting two Beatles’ songs back to back suddenly make the album seem like a Beatles tribute. One would have been fine.

Finally, the album reaches its final song with Bobbie Gentry’s Ode to Billy Joe and shifts abruptly, and I mean abruptly, into honky tonk! While Peterson and Ogerman’s take on the song isn’t half-bad really, it has the unfortunate effect of sounding as if it arrived from another album entirely, or maybe another planet. Imagine watching The Godfather for two and a half hours only to have the final reel replaced with the one from Brian De Palma’sScarface. They’re both about gangsters and both star Al Pacino, but they really don’t work together and take you in very different directions. This song’s arrangement and inclusion on the album is a true head scratcher.

The fact that they weren’t comfortable releasing an album with just nine songs is unfortunate because I can tell you that if this album ended after Eleanor Rigby, it would be damn near perfect. As it is, it is a work of orchestral jazz that has some of Oscar Peterson’s finest work but crashes and burns within feet of reaching the finish line. Even with the crash and burn ofOde to Billy Joe, it’s a masterpiece of piano and strings that can’t be recommended highly enough.

One thought on “Oscar Peterson Motions and Emotions”